Want to know a secret about the New Fat Ladies? We really really really like cake – reading about it, baking it and of course, eating it. We make a lot of cakes, and over the coming months we’ll be sharing at least a few of our favourites from events in our lives, both big and small.

The first is a cake that S-J baked for her beautiful partner’s 30th birthday party. A two tiered rich chocolate cake with lashings of white chocolate frosting, decorated with edible wildflowers from her garden. I was super sad to not be there for the party to eat a slice or three, but now I get to write about the cake and that’s almost as good as getting to eat it, right? Well no, but I’ll talk about my birthday cake in a second, and I definitely got to eat that one!

So let’s get to the recipes. And a couple of tips. Look out for the tips.

Some maths will be required to work out how many batches you will need to replicate the number of layers that S-J made or to get to the size that you need (maths that ends in cake is maths worth doing). If you do just one batch as is written below, you will get a lovely cake more suited to 8-10 mouths.

Tip: This cake is best when you make it with ingredients at room temperature, so make sure you remove the butter, eggs and sour cream from the fridge at least 2 hours before baking.

Preheat oven to 180C. Grease and line your tins.

Add all ingredients to the bowl of your food processor and blend until you have a smooth, thick batter. Pour mixture, split evenly, into your tins.

Place tins in oven and bake for 35 minutes or until a skewer inserted in the center comes out clean. Leave to cool for ten minutes on racks, then turn out to cool completely. This cake is super prone to splitting, but you don’t need to worry about that as very soon you’ll cover any unsightly cracks with luscious frosting.

To make your frosting, start by boiling a saucepan of water. Reduce the heat to a very low simmer and put a glass or metal bowl on top (you just made a homemade baine marie, go you!), add butter and chocolate to bowl and, once melted, stir to combine. Tip: this bowl will be REALLY HOT, use an oven mitt to move/hold it. Remove bowl and let cool slightly. Add the golden syrup, vanilla and sour cream to the chocolate mixture and stir to combine.

Add the icing sugar into the bowl of the food processor and whizz briefly to remove any lumps. Pour the chocolate mixture into the processor and process until frosting-y. Depending on your climate you may need to add a little more of either sour cream or icing sugar to achieve the right consistency.

Slather the icing on cakes and pile up. S-J decorated this cake with fresh edible flowers from her prolific garden, but it would also be lovely with chocolate curls or fondant decorations.

Over the festive season last year I was lucky enough to get to eat (too many) of the most delicious spiced cherries in red wine from  Bruny Island Cheese (club) and I have been chasing that taste ever since.

Cherries are one of the most versatile fruits, great fresh, stewed, jammed, savoury or sweet, and always delicious. For this pie I borrowed the amazing cherry pitter from S-J and took to gutting my cherries with maniacal glee (pro-tip: don’t wear a white shirt while you pit 1kg of cherries, it’s a blood bath). Full disclosure, I have not mastered the pitter and did have to issue a warning to my test-eaters to be on the lookout for stray pits – only 7 were found in the whole pie so that’s about a 95% success rate, I’m calling it a shaky win.

Pie dough/pastry, enough for a double layer pie
I used Smitten Kitchen’s Pie Dough 101 but did the whole thing in the processor to save my bench top.

If you make your own dough, ensure that it is chilling in the fridge while you make the filling, if you’re using store bought frozen dough, make sure it’s defrosted in the fridge (needs to be pliable to line the dish).

Pick over your cherries and remove any stems and nasty fruit. Use your pitter (or a knife – be careful!) and remove all pits.

In a large bowl stir together all the pie ingredients except the butter. Mush the cherries a little as you go to release their juices. Enjoy your delightfully pink fingers and attack the cat with them. It’s good if you forget you have cherry fingers and wipe hair out of your face and discover the red smear hours later and give yourself a fright.

Roll out half of the chilled dough between two sheets of bake-paper to about 14-inch round (I never roll things perfectly round, but good luck to you). Ease it into your pie plate – remove one of the sheets of bake paper, flip the dough into the pan and use the edges of the paper to help ease the crust in. Press the base and corners to make sure there are no air bubbles. Trim the edges leaving an overhang of about 2 cm.

Pour the filling into the crust. I like a gooey pie – if you don’t you may like to hold back some of the liquid in the bottom of the bowl. Chop your butter into small cubes, scatter those on top of the filling.

Roll out the remaining dough the same way, cut into 2cm strips and layer half across the pie, leaving 2cm overhang. Take the remaining strips and weave to make the lattice. Fold the overhang under the bottom crust, pressing the edge to seal it, and crimp the edges together. Using a pastry brush, egg wash the pie crust, then sprinkle sugar over the top.

Bake the pie on the middle rack of the oven for 25 minutes. Reduce the temperature to 175C. and bake the pie for another 20 – 25 minutes, or until the crust is golden (if it starts to brown on top too quickly, tent with tin foil and continue baking). Remove from the oven and allow to cool.

I think this pie is about 200% more delicious after a night in the refrigerator and is excellent served with whipped cream and/or vanilla bean ice cream. A lemon zest infused marscapone would also be pretty delish!

Sometimes my boss and I like to go to fancy places to celebrate things. Yes, I am spoilt. No, I don’t mind!

Our clinic recently reached a milestone and so we decided to celebrate at a wine bar/restaurant chosen by my boss’s husband. He does most of our restaurant picking as he works in the city and hears about places we might like. He was not wrong with this pick. Nestled up at the Spring St end of Lt Bourke St, Punch Lane Wine Bar was a deliciously delightful find. We met my friend there (who was already enjoying the delightful waitstaff) and the four of us decided on the tasting menu (5 courses for $69, a fancy-food bargain!) and a delicious bottle of bubbly to celebrate.

END_OF_DOCUMENT_TOKEN_TO_BE_REPLACED

In a lovely coincidence, I happened to make Apple Strudel the same week that the lovely lads and ladies on the Great British Bake Off had a strudel challenge. It’s like it was meant to be. It probably had more to do with the 1kg of apples I had picked up at the market the week before that were judging me from their fancy fruitbowl. Whatever the reason, strudel was made and I carted it off to a dinner party/games night at a lovely friend’s home and it was a tasty to ending to a deliciously autumnal meal (yes, spring is here, no, I don’t accept it, AUTUMN FOR PRESIDENT).

Disclaimer: We are a cooking blog, but we are people too. I find that I have things in my life that I prefer to do that don’t involve the multi-hour process to create butter puff pastry, so I tend to buy the fanciest brand I can afford from the frozen section and call it a day. If you can actually tell the difference, you impress me, because I’ve made many kinds and I really can’t. It is just not worth it to me for a casual meal, and if you can play with store-bought and get it to do what you want, I say take that extra time you have to drink a cider, eat some good cheese and pat yourself on the back for your excellent time management choices.

One day we’ll probably do puff pastry and I’ll be all “IT’S SO WONDERFUL I DON’T KNOW WHY I DON’T MAKE IT ALL THE TIME”, and you can point me back to this post and heckle me if you like, I won’t care though, because no matter what, in the end, I’ll have a belly full of pastry!

So, back to the strudel. I have a fear of runny liquid insides ruining my strudel, so these apples are cooked twice before they are rolled inside pastry for the final filling. This means that it is a very soft filling once cooked for the second time. All the apples collapse into the raisins and disappear into your tummy in seconds.

I made two, and the four of us ate it all.

END_OF_DOCUMENT_TOKEN_TO_BE_REPLACED

Apples and cherries should just get married, they’re so perfect together. I enjoy eating this crumble so much, and have been making it fairly regularly through Winter and into Spring. It is friendly to variations like subbing out either of the fruits for apricots/blueberries/rhubarb (with extra sugar)/plums/peaches but the cherry and apple combo is my favourite. 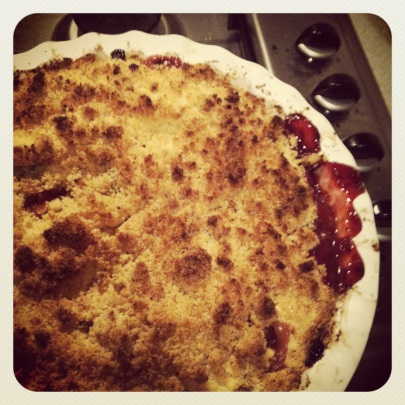 You can leave the apple peel on if you like (as I’ve done here), but if you’re being fancy, or like me you enjoy it when the fruit collapses all willy-nilly into itself, then peeling the apples is your best bet.

Grab a large pie dish, using one of the cubes of butter, rub all over the inside of the pie dish and lick your buttery fingers.

In a small bowl mix the brown sugar, cinnamon, ginger and cornflour, using a fork to break up any lumps.

Peel, core and chop the apples into about a 1 inch dice (or the size of your cherries). Squeeze half of the lemon over the apples to stop them from browning.

In a large bowl, combine the lemony apples, cherries, and the sugary spiced mixture. Using your hands, mix gently to coat the fruit.

Pour the fruit ino the buttered pie dish. Push it down so that there is a small lip around the edge for the crumble to sit in and then you really want the fruit to sit up above the lip  a little in the middle, so mound it up, as it will collapse a bit during cooking.

I was trying to be fancy and cut the fruit into thin slices, don’t be like me, it went to mush. Boo.

Add the flour, sugars, cinnamon and butter to a bowl. Using your fingers, rub the butter into the flour until you have a sort of rubble texture.

Carefully pour/plop/pat this on top of the fruit mixture. Pat down firmly.

Set pie dish on a tray/cookie sheet covered in baking paper and put into the middle of your preheated over for 25 – 40 minutes. If the top starts to brown too much, remove the crumble from the oven, break the topping up a little and then place back into the oven (this lets ALL of the crumble bits have a chance to brown).

Serve with cream or icecream.